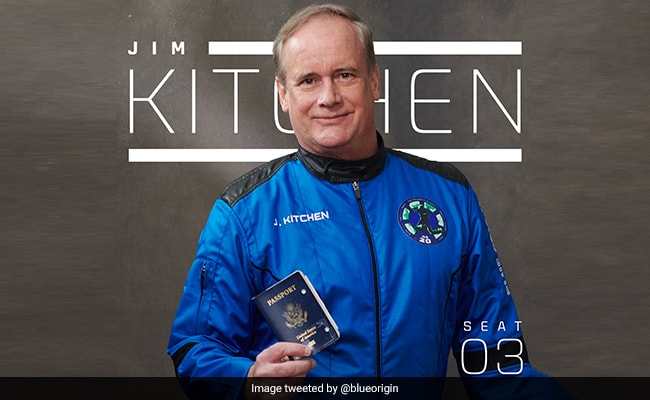 Jim Kitchen is the only person to have visited all 193 UN-recognized countries as well as space.

At Bloomberg Pursuits, we love to travel. And we always want to make sure we’re doing it right. So we’re talking to globe-trotters in all of our luxury fields, food, wine, fashion, cars, real estate to learn about their high-end hacks, tips, and off-the-wall experiences. These are the Distinguished Travel Hackers.

The 57-year-old entrepreneur and investor says he’s the only person on Earth to have visited all 193 UN-recognized countries as well as space he was part of the civilian crew on Blue Origin’s rocket, the same trip on which comedian Pete Davidson was originally scheduled to fly in March.

In addition to that 62-mile milestone, Kitchen estimates he’s logged from 7 million to 10 million miles in the air at least 3 million of them with American Airlines. His favorite carrier, though, is Emirates. “It’s just the wood paneling in those business class suites, those enormous video screens, the best beds,” he says, “Gosh, I hate to admit this publicly, but I still think I have one of their blankets.”

Having worked in various ways in the travel industry for most of his career, including founding (and selling) group tour company SBT, he now acts as an angel investor and serves as a professor focusing on entrepreneurship at University of North Carolina at Chapel Hill, where he lives with his wife Susan. Here are some of the globetrotter’s top travel tips.

When packing, bring a cheap shirt, but leave your wedding ring at home.

I had taken a bike tour and we had played the uniquely Colombian game of tejo: You throw, like, a 3-pound weight and there’s a circle and if you hit in the center of the circle, the whole thing explodes. My guide asked me when we were playing, “So where’s next?” And I said, “Oh, tomorrow I’m flying to Venezuela.” And he’s like, “In those shoes?” I had a pair of running shoes on, nothing fancy. He said that thieves will often size up foreigners by their shoes and jewelry.

So off we went to the local flea market and purchased an old pair of leather shoes. I proceed to wear them, with this kind of scratchy, polyester shirt, looking like some Chevy Chase character walking through the airport. If you have means, traveling through the developing world is not the time to express that. It’s the time to fit in and lay low. I don’t wear my wedding ring, either, because I don’t want people to know that I’m married, because they could kidnap me and call my wife and say, “Hey, we’ve got your husband,” and she would probably pay the ransom.

In my 30-plus years of traveling, I’ve experienced that restaurants offering spectacular views of the city or sunsets often have terrible food. I have found this notoriously true in the Caribbean: Pier One in the Bahamas, for example. There’s this gorgeous, long pier with a restaurant built on top of the pier, and the views were spectacular, a million dollars, and the food was just awful. You were happy to feed it to the sharks it was that bad.

Why you should keep and customize a spare credit card.

I always put one credit card in the bottom of a pair of tennis shoes, so that if all hell breaks loose like I’m robbed and everything’s taken if they don’t take my shoes, I’m probably OK, because at least I’ll have a credit card to buy a ticket or to get something. It’s also a Visa card that you can customize with a photograph. I have a picture of me and my family on it, so it’ll be some sort of visual ID, too. In the worst case, I can say: “Hey, yeah, that’s me. ” It’s got my name and photo on it.

On a long trip, the one thing he won’t leave home without.

Some people don’t care. They’re used to sleeping on polyester. I am not; I will be itchy all night, and I won’t sleep a wink. So if I’m gone for a three- [or] four-week trip, I’ll take a 10-pound suitcase, and three pounds of it might be an old cotton sheet. It’s a sheet that has been in the Kitchen household at some point on a bed. I cut a king size in half, and I pull it over me, and wrap myself into the sheet. I don’t sleep that much when I travel, so being able to get five or six hours is worth that weight.

There’s much more to tourism in Africa than simply going on safari.

One of the craziest experiences that I’ve ever had was in Gabon, meeting a guy named Tatayo, who looked like Keith Richards and practices this religion known as Bwiti. They eat the iboga root and go into a trance for like three or four days. And it messes you up, but it cleanses your mind. I did not participate, but it was fascinating. I would argue, having been to the 54 countries in Africa and being a beach snob, that Gabon has the best beaches there, especially the peninsula part of the country that juts out into the Gulf of Guinea. I love Pongara: It’s a white-beige sand beach that you walk up to the water crystal blue water and see fish teeming in it. I stayed at Pongara Lodge right there. Animals like elephants live adjacent to this beach, and I mean, they would frolic on the beach. It was a lot like if you had to imagine what Eden would look like.

When you’re planning a trip to space, this is what astronauts tell you to wear.

I hate to say this, but I was actually encouraged by a guy that was one of the astronauts that flew on a Hubble mission, Mike Good, to wear a male adult wetness protector I don’t want to call it a diaper. We had a 45-minute delay [at take-off], because there was a telemetry issue. So you load into the capsule, you’re there, it’s nerve-wracking, you’re waiting. You don’t know whether you’re going to launch or not. And my concern was, “Gosh, what if you have to go?” The last thing you want to do is be concerned about is the bathroom; it’s a short enough flight, and you want to enjoy every second of it, right? Mike said: “Hey, just do the full astronaut experience, man. Just don’t worry about that.” And so I kind of embraced it. The reality is I didn’t have to use it, but I just wanted to take that risk off the table.

Create a routine around what you wear on any long trip.

About 10 years ago, I think I was in Nauru, and I got off the plane, and I started panicking because I couldn’t find my phone. I was lucky, because I asked security to go look, and 15 minutes later, they found it. So from almost losing a phone, I started packing clothes that keep me organized. I’ll bring two pairs of shorts with four pockets in the front, they’re by Ex-Officio.

In my right lower pocket goes my passport, and I keep it there at all times. After going through customs, I stop and take the time to put my passport right back into that pocket. Why there? Because that’s where it resides, always, and it being there keeps me organized. If it’s not there, something feels amiss. Same with the other pockets: In my left lower pocket is where my phone goes, and my wallet stays in my left upper pocket it has a zipper, so I know that somebody can’t pick pocket me there. I leave my right upper pocket free for my boarding pass and anything else.

Want to take your own trip to space? Do extra prep.

I was not physically prepared for the G-forces that, going from zero to 2,300 miles an hour, it was like Macaulay Culkin holding his face your face melting off your skin. I downplayed the significance of those G-forces. I do think [more] centrifugal force training would be helpful, and I did mine at Nastar outside of Philadelphia.

The family-friendly five-star resort he returns to again and again.

Four Seasons Peninsula Papagayo is a true luxury hotel and one of the nicest in Costa Rica. It sits on a hill overlooking the Pacific Ocean, but the gorgeous tropical view is just one thing that stands out. For me, it’s an easy one-stop flight through Houston or Charlotte, N.C.. I’ve spent an inordinate amount of time there with my family surfing lessons, zip-lining, or you go visit the volcanoes, river rafting, hiking. We volunteered on the Costa Rica-Nicaragua border, with some local communities there. To me, that area feels like Hawaii was before Hawaii got really built up.

I’m not like an avid golfer, I might play five or six times a year, but if you’re staying on the property, you can play one of the best golf courses in Latin America: the Ocean Course at Peninsula Papagayo. Most of the holes have drop-dead gorgeous views of the ocean or bay, and can easily distract players intent on carding a low score.

Kitchen is no fan of street food on his travels and here’s why.

I want to de-risk anything as much as I can. My biggest fear while traveling is getting sick, and so I avoid eating most foods that are for sale on the street. Yes, I’ve made exceptions to this rule, but I generally choose not to seek out street food, no matter how tempted I am to eat it. There are those who advise the opposite. For them, trying new foods, especially street foods, is all a part of the adventure. I’m going to assume that, unlike me, they’ve never suffered the consequences of eating curried goat from a street vendor in Jamaica. You spent months getting visas for these places, and you did something stupid like eat curried goat, and I was sick for a week. I almost died.

My thing is I’m trying to see the world and experience the world and talk to people. I don’t necessarily need to eat the food like Anthony Bourdain did and make food the center. My center is talking to people and getting to know people, learning about the country through the most ordinary of people in marketplaces around the world. That’s kind of my thing.

(Except for the headline, this story has not been edited by NDTV staff and is published from a syndicated feed.)