STUDENT LOAN FIGHT HEATS UP AS BIDEN WEIGHS DECISION: The debate over canceling student loan debt has ebbed and flowed in Democratic politics since progressives seized on it as a go-to issue in the 2020 presidential campaign trail. But now that it’s a front-burner issue for the White House — President Joe Biden has teased a decision in the coming weeks — the issue is once again roiling the left.

— The latest salvo was fired over the weekend from the liberal New York Times editorial board, which came out stridently against widespread student loan forgiveness. Canceling student loan debt “would set a bad precedent and do nothing to change the fact that future students will graduate with yet more debt — along with the blind hope of another, future amnesty,” the NYT editorial board wrote, calling the idea “legally dubious, economically unsound, politically fraught and educationally problematic.”

— The column follows other prominent voices on the left such as Paul Begala and Bill Maher who in recent weeks have pushed back against the idea of Biden canceling student loans. Some Democratic economists, such as Larry Summers, have long been skeptics of student debt cancellation.

— But other key constituencies of the Democratic Party are mobilizing in the other direction. The AFL-CIO, for example, last week came out in favor of student loan forgiveness. “After all that we have endured in the wake of the COVID-19 pandemic, we cannot ask working people to make further sacrifices,” president Liz Shuler said in a statement. “Now is the time to cancel, not collect, student debt.” The NAACP held its latest rally in front of the White House to call for debt forgiveness last week.

SENATE DEMOCRATS ARE TRYING TO INFLUENCE BIDEN AHEAD OF ANY DECISION: Senate Democrats are pushing for one last chance to press Biden to go as big as possible on canceling student debt as the White House deliberates over a final decision in the coming weeks, POLITICO’s Burgess Everett reports.

— Majority Leader Chuck Schumer, as well as Sens. Elizabeth Warren (D-Mass.) and Raphael Warnock (D-Ga.), have communicated to the White House that they want Biden to hold tight on any executive action until they can press him one last time, according to two people familiar with the matter. The three senators met last week to plot student loan strategy and are seeking a meeting with Biden as soon as he will do it, one of the people said.

— On Sunday, Warnock addressed new graduates at his alma mater, Morehouse College, where a billionaire famously paid off the loans for the entire class of 2019: “Look, I work for the government and a little church up the street. I can’t pay off your loans, brothers. But I am pushing President Biden to cancel student loan debt.”

— Republicans, meanwhile, are pushing back forcefully against the idea in Washington and on the campaign trail. On Friday, a group of House Republicans reiterated to the White House they believe Biden lacks the legal power to cancel large amounts of student debt. (Bianca Quilantan has more here.) J.D. Vance, the GOP Senate candidate in Ohio, has railed against loan forgiveness as a bailout for “corrupt” university administrators and urged the party to “fight this with every ounce of our energy and power.”

Coming out of Teacher’s Appreciation Week, we at Educators for Excellence believe one week is not enough to celebrate everything teachers do for our society. Our most recent survey, Voices from the Classroom, sampled hundreds of teachers from diverse backgrounds. The data shines a light on what teachers are saying about the current state of our education system and what we can do to make things better for generations to come. CLICK HERE to learn and grow with us.

Want to receive this newsletter every weekday? Subscribe to POLITICO Pro. You’ll also receive daily policy news and other intelligence you need to act on the day’s biggest stories.

SUSPECT IN BUFFALO SHOOTING WAS INVESTIGATED OVER SCHOOL THREATS: Police on Sunday said the 18-year-old white man accused of killing 10 people at a grocery store in Buffalo, New York, was previously investigated for threatening to carry out a shooting at his high school last year. NPR has more.

— Officials said the shooter, Payton Gendron, targeted the supermarket in a predominantly Black neighborhood for the “express purpose” of killing as many Black people as possible, according to The Associated Press. The Justice Department is investigating the shooting as a “hate crime and an act of racially-motivated violent extremism,” Attorney General Merrick Garland said in a statement.

THIS WEEK ON THE HILL — The House Rules Committee will meet today to tee up Democrats’ overhaul of federal workforce training programs for a floor vote. The reauthorization of the Workforce Innovation and Opportunity Act cleared a House committee earlier this year on a party-line vote.

CARDONA WEIGHS FLEXIBILITY FOR SCHOOLS ON COVID RELIEF SPENDING: The Biden administration will consider giving schools up to 18 months of extra time — and perhaps even longer — to spend their federal Covid-19 relief aid on upgraded air-circulation systems or other infrastructure, a top Education Department official told an advocacy group Friday.

— Key context: Schools must still commit to spending plans for their share of $122 billion in Covid relief money by September 2024. But Roberto Rodríguez, assistant secretary of education, wrote in a letter to AASA that the administration would consider approving requests for schools to have additional time to use the money it has committed to spend on those projects. Juan Perez Jr. has more details here. 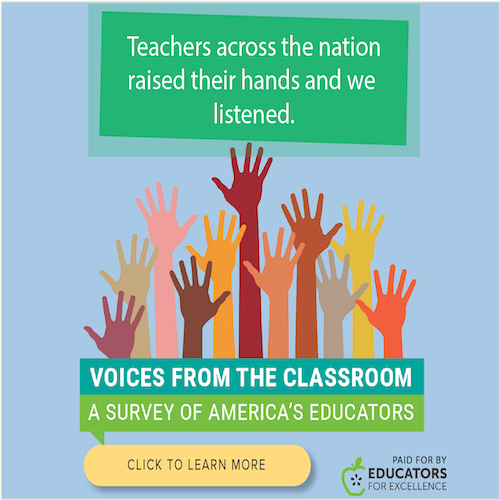 COMMONBOND EXITS STUDENT LOAN REFI BUSINESS: CommonBond plans to wind down its student loan refinancing business over the next month and will instead focus on financing products in the solar energy market, the company announced on Friday.

—CommonBond was among the private student lenders who in recent months had been lobbying to end the federal government’s pandemic-related freeze on student loan payments, which has significantly weakened demand for refinance loans.

— Kota Mizutani is the new deputy communications director for the House Education and Labor Committee. He was formerly the committee’s press secretary.

— Biden plunges into the risky politics of student loans: The Washington Post.

— Delaware State University plans to file a federal civil rights complaint after its women’s lacrosse team was stopped and searched by police in Georgia: POLITICO Pro.

Coming out of Teacher’s Appreciation Week, we at Educators for Excellence believe one week is not enough to celebrate everything teachers do for our society. Our most recent survey, Voices from the Classroom, sampled hundreds of teachers from diverse backgrounds. The data shines a light on what teachers are saying about the current state of our education system and what we can do to make things better for generations to come. CLICK HERE to learn and grow with us.