Isabella Loretta Janke is a real estate agent and interior design professional. In the following article, Isabella Janke discusses the coming trends for home design in 2023, what buyers are looking for, and if the popular open concept design is what’s hot, or not in the new year.

The open floor plan style is a modern, spacious and clean-looking interior trend that many homes have adopted over the past few years. Many are wondering if open-plan homes are seeing a downturn in popularity. Many homes featured on the market have implemented a more traditional feel, without the large, shared spaces, and seem to include smaller, more intimate rooms.

Isabella Janke explains below how this trend came to life and why its popularity seems to be waning.

What an Open Floor Plan Style Is

The style is associated with modern living, as it provides a spacious, minimalistic, light, and clean look throughout the house. However, the style has begun to be critiqued by many who prioritize privacy, have implemented working from home, and those who want a cozier feel in their living spaces.

The History of the Design

Isabella Loretta Janke says that the 20th century saw an advancement in structural engineering, which meant that building materials strengthened, and architectural designs could become more experimental. Architects were now able to consider dispersing load-bearing walls differently, as individual rooms were no longer dependent on their own structures for stability.

Although many were experimenting with the open space design idea throughout the first half of the 20th century, it was not implemented until the 1950’s in Germany, as two consultants made plans for an open floor plan office area, allowing for better communication between colleagues. This idea was soon widespread and transferred from commercial to residential interiors, and open floor plan designs were adopted by many homes during the 1970’s.

Isabella Janke says that the open interior choice has been increasingly popular ever since, creating a seamless flow between rooms and allowing homes to become more spacious and free flowing.

Isabella Janke explains that open floor plans are not only aesthetically pleasing, modern and functional, but they also allow for increased air flow and light throughout the home.

Removing the walls between rooms can not only help to give the impression that the space is bigger and lighter but is also a fantastic design option if the homeowner frequently entertains. The added space can make large groups more comfortable, so party crowds are able to mingle freely without moving into different rooms to chat.

Isabella Janke says that open floor plans can be a great choice for parents too, as children are able to play in the living room while still being able to be supervised by mom in the kitchen. It also makes cleaning easier and quicker, which is essential with children. 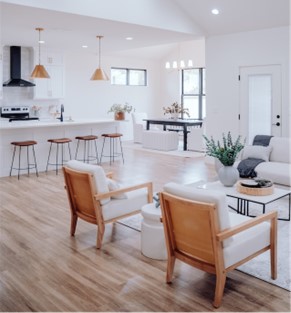 Is the Open Floor Plan a Dying Trend

Following the pandemic, Isabella Janke explains that many people have adopted remote working and prefer the privacy and quiet that comes with divided spaces.

Martha Stewart claims that the added noise and distraction generated from families spending more time inside because of COVID-related restrictions, has driven more people to move away from open plan interiors and re-adopt more “old-fashioned” segregated rooms for better focus and privacy.

Researchers have found that one of the main issues experienced by open floor plan homeowners is the inability to watch multiple forms of entertainment simultaneously.

Isabella Janke explains that traditional interior design includes divided rooms, each with their own televisions, computers or other electrical devices allowing everyone in the home to enjoy their choice of entertainment individually, whereas open space designs don’t allow for a separation of sounds or distractions. Isabella Loretta Janke explains that this leaves many families having to compromise or endure the sounds of multiple entertainment forms at the same time.

Traditional, divided rooms can also help with utility sounds. Having a separate utility room accommodating appliances can prevent these dreary sounds from carrying throughout the house, which can promote better communication and productivity.

Isabella Janke says that like sounds, smells are more likely to carry throughout the house in an open floor plan design.

Homes with large, open spaces for multiple rooms are also harder to heat. Isabella Janke says that heating one large room with high ceilings has been found to be more costly than heating smaller, more individual rooms. With the cost of home heating oil being so high, traditional spaces, with closed off rooms is much more economical in the current state of the market.

Although open spaces can provoke a plethora of issues, especially for families, they continue to be popular interior choices for millions of homeowners around the world. So, while its popularity has waned since the pandemic, it does still remain a fashionable favorite.

Many homeowners have added walls after enduring space-sharing problems such as lack of productivity and sound reverberation. However, the open floor plan style is still a popular interior design choice, offering added light and a more spacious living area for family time or hosting guests.

Open spaces may lack functionality in some households, causing the trend to slip from popularity, but many people around the world still enjoy the spacious, modern feel that open plan living provides.